Ballard Jazz Festival co-founder Matt Jorgensen was a guest on The Seattle Channel's ArtZone with Nancy Guppy. Check out the interview and performance. 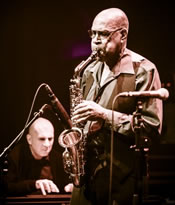 From The Seattle Times

The Ballard Jazz Festival, Seattle’s most convivial and inviting jazz event, has announced that the great saxophonist Sonny Fortune will headline this year. The festival runs Wednesday-Saturday, April 16-19.

Fortune, 74, is best known for his work with McCoy Tyner and Miles Davis in the ’70s, but has produced a highly-respected portfolio of albums as a leader, including “Four in One.” An added bonus for Seattle: sizzling, Portland-based pianist George Colligan will be at the keyboard.

Also on the bill at Ballard, and possibly even more exciting, is Spanish "flamenco jazz" pianist Chano Dominguez, who translates that guitar- and vocal-based music to piano in an original and compelling way.

Continue reading at The Seattle Times.

From The Seattle Weekly: 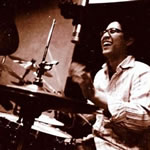 April in Seattle can mean only a few things: a few teasingly beautiful days of clear blue sky; the hope that accompanies the Mariners opening day; and of course the annual Ballard Jazz Festival. Celebrating its 12th year, the festival has come into its own as both a destination for jazz aficionados and as a yearly gathering for some of Seattle’s best and brightest musicians.

... By embracing the new and the weird, the festival in Ballard is positioning itself as a can’t-miss event for fans of all music and a vital bridge to the future vitality of jazz itself.

Read the entire story at The Seattle Weekly.

April is a particularly good month for jazz in Seattle. For one, the time draws near for Ballard's own 11th annual jazz festival. Always short and sweet, this year once again offers up a concentration of the jazz pulse found in the Scandinavian corner of the Emerald City. With four days of music to commence on April 17, the festival sees 15 participating venues, including the Nordic Heritage Museum, an unwavering supporter since day one. Always growing in attendance, the festival is further blossoming into one of the Northwest's most exciting cultural events and local economic stimulators.

Click here to read the entire preview in Earshot Jazz. 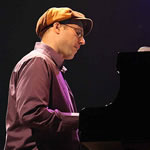 SEATTLE TIMES: Jazz is busting out all over Ballard

[George] Colligan plays the Ballard Jazz Festival next week, as a leader at several events and as a sideman with [Gary] Bartz ...

The Baltimore-raised pianist plays with sizzling abandon in a driving, polytonal style that owes a lot to Herbie Hancock and McCoy Tyner without slavishly imitating either.

Colligan is an emblematic choice for the Ballard fest, in that he represents the event's hyperlocal-with-a-dash-of-flash values. A teacher as well as a working musician with an international reputation, Colligan is ensconced deeply in the Portland scene and understands that passing the music along to young players is as much a part of the tradition as playing it.

Continue reading at The Seattle Times 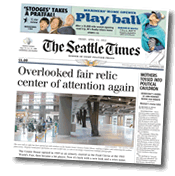 Jazz has always relied on the commitment of grass-roots activist-musicians. It would be hard to find two more committed souls in that department than drummers Matt Jorgensen and John Bishop who, with their feisty record label, Origin, produce the Ballard Jazz Festival, which opens Wednesday.

Fittingly, one of this year's headliners is an activist-musician himself, the dynamic Philadelphia pianist Orrin Evans. Though Evans is a New York journeyman, he lives in Philly, where he nurtures the scene with such projects as the Captain Black Big Band, a group Down Beat magazine critics recently called a "rising star." {read more}

The 2012 Ballard Jazz Festival is Not Your Daddy's Jazz Fest
I know what you're thinking. You hear the phrase "jazz festival" and you immediately think of middle-aged, silver-haired intellectuals sitting in silence, bobbing their heads, sipping merlot and listening to sleepy music with an air of importance that reeks of pretense.

Well, let me be the first to tell you that the 2012 Ballard Jazz Festival is decidedly not that kind of jazz fest. {read more}

Examiner: 2011 Ballard Jazz Festival will take the chill off springtime in Seattle
Taking the chill off the Pacific Northwest's cold spring is the 2011 Ballard Jazz Festival, April 20-23. Now in its ninth season, the jazz fest has become a major player in the Northwest. And Old Town Ballard provides the perfect backdrop, with a variety of venues ranging from clubs and bars to storefronts and a museum. {read more} 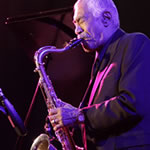 PRESS: SEATTLE TIMES
The last few years of tenor saxophonist Hadley Caliman’s career have been among his most productive, after decades spent off the radar in prison, in recovery — both the result of his past drug addiction — and quietly teaching music while living in the Columbia River town of Cathlamet.

Caliman, who will perform Saturday at the annual Ballard Jazz Festival, is awaiting the release of his third album in two years (a yet unnamed recording with longtime friend Pete Christlieb), which follows “Gratitude” in 2008 and this year’s “Straight Ahead.” In early April, the album peaked at No. 2 on the JazzWeek Jazz Chart — a measure of radio airplay in North America. {Continue reading at The Seattle Times}

SCENES FROM THE BALLARD JAZZ WALK
MyBallard.com has posted their coverage of the Ballard Jazz Walk.

SEATTLE TIMES: Longtime sax buddies rekindle days of soulful club gigs
When tenor saxophonists Pete Christlieb and Hadley Caliman first played together as young men, the two were part of a sextet with a regular stand at a Los Angeles jazz club called Marty's. The popular club was on the outskirts of Watts, and over time became a sort of dueling ground for regular and visiting horn men. {read the full story}

MYBALLARD.COM: It will be all jazz all the time in downtown Ballard tonight.
{read the full story}

SEATTLE TIMES: Ballard hasn't gotten too big for jazz fest
What sets the festival apart from others in the area is its organic, homegrown quality. Most of the musicians scheduled to perform (Hadley Caliman, Thomas Marriott, Bill Anschell, Kelley Johnson, Bill Ramsay, Jay Thomas, Hans Teuber, Mark Taylor, Jeff Johnson, among many others) are top-shelf, local musicians. The Ballard festival does not receive funding from arts organizations or corporate sponsors, like the festivals in Bellevue or Port Townsend, or the Earshot festival.

SEATTLE TIMES: The Ballard Jazz Walk: a tailor-made musical, sociable stroll
As much a civic exercise as musical event, the Ballard Jazz Walk commences Thursday night on the streets of downtown Ballard, less than two weeks after the end of the city's largest and longest jazz festival, Earshot. Continue reading ...

SEATTLE PI: SCAT AROUND IN BALLARD AND SOAK IN JAZZ
Friday's Jazz Walk is the festival highlight and its biggest draw. "With 16 bands in 13 venues, it is a sure thing," Jorgensen promises. "If you can't find something you like in all that, you need to look for a different genre of music."
{Click here to read the entire article}

Press from the 2005 Ballard Jazz Festival:

Seattle Times' Critic Pick
Thursday-Saturday: Hot on the heels of the Earshot Festival, the intrepid folks at Seattle's grass-roots Origin Records present three days of muscular, hard-swinging jazz, with the accent, not surprisingly, on drums, since the label is run by drummers Matt Jorgensen and John Bishop. The festival gets under way at 8 p.m. Thursday at the Tractor Tavern with Brotherhood of the Drum (Matt Chamberlain, Kevin Sawka, Bishop and Jorgensen), continues Friday with the always-bountiful Ballard Jazz Walk, featuring multiple Seattle bands, then comes to head Saturday — pardon the drum pun — with workshops and a concert by vibist Joe Locke, pianist Geoff Keezer, tenor saxophonist Eric Alexander and others. The Saturday show is at Mars Hill Church, 1401 N.W. Leary Way, Seattle; $20 (206-219-3649 or www.ballardjazzfestival.com). All-festival pass: $25.
- Paul de Barros

Press from the 2004 Ballard Jazz Festival:

"I'm coming a day early, just to hang out," said Wilson in a phone interview from his home on Long Island earlier this week. "There's so many great players in Seattle. People use New York as the barometer — and the great thing here is the multitude of players and the opportunities and the willingness of people to do things — but these [local] scenes are so strong!"

The second annual Ballard Jazz Festival, a joint venture of Origin Records and the Ballard Chamber of Commerce, gets under way at 8 p.m. Wednesday at the Tractor Tavern with the first of two programs dubbed "Brotherhood of the Drum."

Press from 2003 The Ballard Jazz Festival:

A Sense of Jazz Community in Ballard, WA (AllAboutJazz.com)

In all, Ballard Jazz Festival events combined to create a glowing sense of pride in a community aflutter with first-time festival success stories—a sense of pride not lost on the out-of-towners. Blade, King, Herring and Co. openly praised festival presenters John Bishop and Matt Jorgensen of Origin Records and the Ballard Chamber of Commerce.

Club Beat: Daylong jazz festival to give Ballard yet another rhythm (Seattle PI)

"...what struck me was the level of community involvement and pro-activity for the arts: in corporate sponsorship, national and local artist participation both professionally and academically, citizen attendance; and the positivism of all involved. Although not surprising for Seattle, the Ballard Jazz Festival was simply a really wonderful time and anyone who was a part of it should consider it a great success."

The Ballard Jazz Festival now has 501(c)(3) Non-Profit status as an associated program of Shunpike.

See how you can join our Founders Circle!