CELEBRATION OF THE DRUM 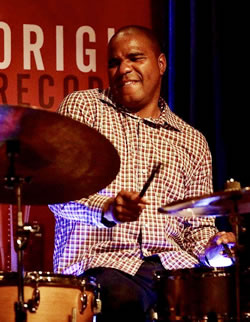 D'Vonne Lewis is a self-taught musician/drummer/poet with a background in gospel, funk, and rhythm and blues. Lewis is the grandson of the late-great ‘Godfather of rock and roll/soul', the Pacific Northwest's Hall of Famer, Hammond B-3 organ legend, Dave Lewis. Because of Dave Lewis, Seattle's 1950's entertainment scene started on the path to desegregation.

Lewis is also known for his tantalizing, tight and in-the-pocket, hip-hop grooves. He has performed and/or recorded with New Orleans funk legend and bassist George Porter, Jr, Seattle's rich, hip-hop/soul and rock and roll legends such as Stone Gossard of Pearl Jam, Ishmael "Butterfly" Butler of Shabazz Palaces/Digable Planets, Reggie Watts, Sir-Mix-A lot, Macklemore, Source of Labor, Blue Scholars and the ever-soulful vocalist, Choklate. He was awarded the Earshot Jazz Golden Ear Award for Emerging Artist of 2006 and the Instrumentalist of the Year in 2013.

By strong encouragement from his grandmother and coming to the realization that he comes from a rich, musical "Lewis" family dynasty, D'Vonne formed the ‘hard-hitting, cutting-edge quartet, Industrial Revelation. In 2014, the band won The Stranger Genius Award in the music category; won the Earshot Jazz Golden Ear Award for best Alternative Jazz Group; and named Best of Seattle jazz band by the Seattle Weekly, and Top Soul Band of Seattle by City Arts Magazine. 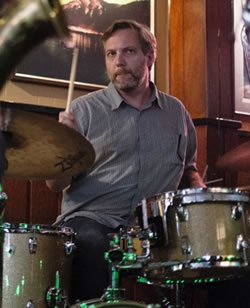 Seattle drummer, Steve Korn, is a musician's drummer. Always making the musical content and quality his first priority, Steve's versatile drumming and overall musicianship has made him an integral part of the Seattle jazz scene. Audiences across the United States, Europe and Russia have heralded his work.

Steve has three recordings on Origin Records, and they have received rave reviews and airplay nationally and Earshot Magazine nominations for Best Northwest Jazz recordings. Steve won the Earshot Golden Ear Award for the 2000 Northwest Emerging Artist for the Year.

For well over a decade, Steve has pursued his passion for photography - as a commercial endeavor but also as an essential chronicler of the Northwest music scene. From his powerful "Face" project, to the high-art portraiture of prominent figures in the dance, classical or jazz world for publications, or his "Leading Questions" series, and more, Steve's work will provide a striking view of this period for years to come. 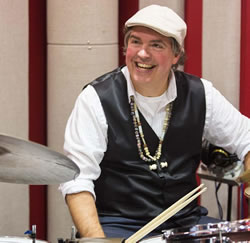 Jeff Busch is an exuberant drummer/percussionist, vocalist, and composer whose passion for soulful music of varied traditions has led him to perform with jazz, blues, and gospel groups - as well as calypso, samba, and Cuban jazz ensembles.

Between 1988-96, Jeff studied fine art, and music in Leeds, England, studying percussion/drum set with Dave Hassel, calypso with steel drum master Dudley Nesbitt, and later Brazilian percussion with Jesse Bannister. In Leeds he first worked as a percussion accompanist for dancers at the Northern Contemporary Dance School; The Phoenix Dance Company and The Northern Ballet.

In 1997, Jeff spent six months in Brazil and studied with a variety of percussionists including Edmilson Costa Teixeira, Gilo do Pandeiro, and Mestres Memeu and Lazaro from Olodum. In 1998 Jeff returned to Brazil and had the opportunity to play and perform with the Jovino Santos Neto group.