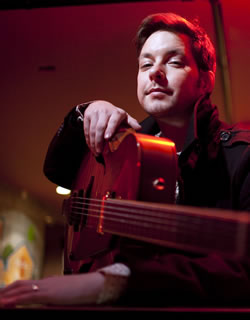 presented in partnership with the Nordic Museum

Lage Lund is acclaimed not only as one of the finest guitarists of his generation, but also one of the most compelling jazz artists in the world today. A regular in the "Rising star – Guitar" category in the Downbeat Critic's Poll, he has been hailed by Pat Metheny as a favorite young guitarist, and is "all music and all soul" according to Russell Malone - one of the judges who awarded Lund top prize in the 2005 Thelonious Monk International Jazz Competition.

Armed with a mastery of the standard repertoire and a growing and impressive body of original compositions, Lund swings with great authority, displaying a staggering harmonic sophistication and a singularly fluid voice as a soloist. He also brings a "casually magnetic" presence to the stage, "channeling reticence into a whisper-quiet mystique" (New York Times). Born and raised in Norway, Lund relocated to Boston after high school on a scholarship to Berklee College of Music. In 2002 he moved to New York and soon became the first electric guitarist ever to enroll at the Juilliard School of Music. In the years since his Monk Competition victory, he has become a sought-after sideman with the David Sanchez Quartet, the Maria Schneider Orchestra, Mark Turner, Seamus Blake and many more. 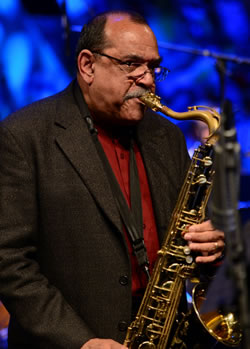 "He is one of the greatest living tenor saxophonists, at the top of his game." Ian Patterson / All About Jazz

With his unforgettable trademark sound featured on over 500 recordings by artists ranging from Cannonball Adderley to Frank Zappa, two-time Grammy Award winner Ernie Watts is one of the most versatile and prolific saxophone players in music. During the ‘70s and ‘80s, Watts was immersed in the busy production scene of Los Angeles, his signature sound heard on countless TV shows, movie scores, almost all the early West Coast Motown sessions, and with pop stars such as Aretha Franklin and Steely Dan. A chance meeting with bassist Charlie Haden led to Watts performing with Haden's Liberation Music Orchestra and to tours with Pat Metheny's Special Quartet, which included Haden. Touring with Metheny's group in the late ‘80s was a turning point for him. "The serious energy of Pat's music inspired me to choose work at this level of performance. Every night I listened to and rejoiced in the power I was feeling in the music." Watts' charter membership in Haden's critically-acclaimed Quartet West, continued for almost 30 years until Haden's death. Watts' work for the audiophile Japanese label JVC Music, and now his growing catalog of original music for Flying Dolphin continue to express his joy in the power of jazz.

In 2014, Watts received the prestigious Frankfurt Music Prize (Germany), "for his strikingly melodic saxophone style and his original tone language, with which he has already enriched several generations of musicians." Of the 32 current winners, only 6 have been jazz musicians, with previous honorees including Chick Corea, Paquito D'Rivera, and John McLaughlin.

"Highway Blues," from their 1999 Origin Records release Speakin' Out (featuring Watts), was included in Microsoft's Windows XP, making it one of the most widely distributed jazz tracks of all time with over 500 million copies of XP sold.