TICKETS: $15; (TICKETS WILL BE AVAILABLE AT THE DOOR) 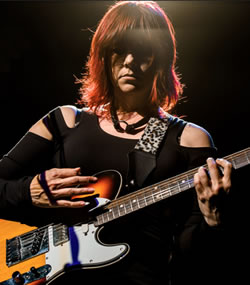 For nearly two decades, Seattle guitarist Kathy Moore has been a go-to guitarist with her talents ranging from rock to funk to jazz and country. She is a studio musician, arranger, multi-instrumentalist and teacher who performs in many theater projects, and local bands. She has also performed with the likes of Thaddeus Turner (Maktub), Mike McCready (Pearl Jam, Mad Season, Flight To Mars), the band Brad, Crystal Beth and the Boom Boom Band, Shawn Smith, Kim Virant, Grace Love, Wayne Horvitz, Ben Smith, Barrett Martin, Stone Gossard among other respected musicians-- she has also played for theater productions such as Passing Strange, Soft Rock Kid, Naked Mole Rat Gets Dressed, Alien Angel, Houses of the Unholy, Operation Mindcrime and many more. 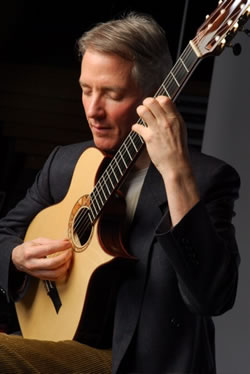 John Stowell began his successful career in the early 1970's with private study with guitarist Linc Chamberland and pianist John Mehegan. Meeting bassist David Friesen in New York City in the late'70s set in motion a whirlwind career that has yet to stop. Their duo recorded and toured prolifically for seven years, with performances in the United States, Canada, Europe and Australia.

In 1983, they joined flutist Paul Horn for a historic tour of the Soviet Union. This was the first time in forty years that an American jazz group had been invited to play publicly in Russia. In 1993, 1995, 1998 and 2012 John returned to Russia, playing in numerous cities. His two sold-out performances in Kursk may have been the first appearances there by an American jazz musician.

John has been Artist-In-Residence at schools in Germany, Indonesia, Argentina, and in the United States and Canada. Since 1995, he has been a contributing columnist for a number of magazines, including "Downbeat", "Guitar Player", "Canadian Musician", "Soundcheck" (Germany), and "Guitar Club" (Italy).

With David Friesen, they performed on the soundtracks of two Academy Award Nominated short films, and 1978's "Through the Listening Glass" was chosen one of the "Ten Best Jazz Albums of the Decade" by the Los Angeles Examiner.

Stowell was named a "Talent Deserving Wider Recognition" by Downbeat's International Critic's Poll in 1978 and 1979, and has been featured in Japan's "Swing Journal", "The Jazz Guitar" (England), and the Biographical Encyclopedia of Jazz (Leonard Feather and Ira Gitler). 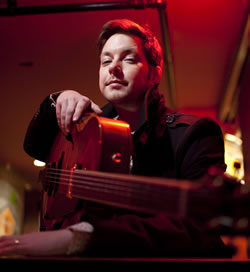 Guitarist Lage Lund kicks off his three-night residency at The Ballard Jazz Festival with a performance at the Guitar Summit.

Lage Lund is acclaimed as one of the finest guitarists of his generation, and one of the more compelling jazz artists today. A regular in the "Rising star – Guitar" cat- egory in the Downbeat Critic's Poll, he has been hailed by Pat Metheny as a favorite young guitarist, and is "all music and all soul" according to Russell Malone - one of the judges who awarded Lund top prize in the Thelonious Monk International Jazz Competition.

Armed with a growing and impressive body of origi- nal compositions, and mastery of the standard repertoire, Lund swings with great authority displaying a staggering harmonic sophistication and a singularly fluid voice as a soloist. He also brings a "casually magnetic" presence to the stage, "channeling reticence into a whisper-quiet mys- tique" and "balances his abundant proficiencies with an aesthetic of gleaming calm" (New York Times).

Born and raised in Norway, Lund relocated to Boston after high school on a scholarship to Berklee College of Music. In 2002 he moved to New York and soon became the first electric guitarist ever to enroll at the Juilliard School of Music. In the years since his Monk Competition victory, he has become a sought-after sideman with the David Sanchez Quartet, the Maria Schneider Orchestra, Mark Turner, Seamus Blake and many more.